The Greater Chicago Region is pleased to provide speakers for your organization's event. If you wish to engage one of our speakers, we ask for a total fee of $150, $100 going to the speaker and $50 made payable to JASNA GCR. The latter funds are used for the Greater Chicago Region's outreach activities. For more information, please contact Diane Capitani, our Outreach Director, at Outreach@jasnachicago.org.

Note: Any of these talks are available as powerpoint presentations. It is helpful if the venue has a laptop and projector available. Handouts can also be provided.

Mansfield Park is perhaps the most “moral” of Jane Austen’s works; all seven deadly sins appear in the novel and no one makes anyone else do anything. When someone is bad, it is because they choose to be bad all by themselves. Austen, like St. Augustine, had a belief in free will–although others may try to lead us astray, our fall is due to our own choices. Maria Bertram, for example, in this novel, chooses to leave her marriage and run away with Henry Crawford, and it is Henry Crawford’s “conscious evil choices” (Augustine) which lead to his downfall of sorts. For both Austen and Augustine, moral law is within each person as is the possibility of making right choices. For Augustine, “morality is not a matter of other people’s opinion. To deny the authority of moral laws is to deny God.” In Mansfield Park, Fanny Price represents moral law. She knows immoral behavior when she sees it and speaks out, which does not make her popular, but does make her right. What this program points out are all the points in the novel where it becomes obvious that Jane Austen, as an Anglican clergyman’s daughter, had read and been familiar with the works of St. Augustine, and was a true Augustinian.

If St. Augustine Were a Marrying Man, Would He Have Married Jane Austen?

Ever wondered why St. Augustine is the patron saint of brewers and sore eyes? This presentation will explain. It will also tell you that Augustine believed women’s souls were more in need of redemption than men’s and that a woman too “full of sense,” like Elinor in Jane Austen’s novel, Sense and Sensibility, was a usurper of the male role and would not have made a good wife and life companion for the discerning male. Would that male have preferred the more romantic, the less cerebral sister, Marianne Dashwood, of the novel? Would the wild and untamed Augustine of his youthful days have preferred one, and the mature man of later years another? Or was celibacy the best thing for everyone after all? What would Jane Austen have made of Augustine’s theology, and would she, Elinor, or Marianne Dashwood have agreed?

Jane Austen wrote Mansfield Park at a time when slave uprisings in the West Indian islands had become a matter of grave concern for the owners of those plantations who did not live in the Indies, but in England, enjoying the largesse the plantations provided, while depending on overseers to keep order and to see that the plantation yields were good ones. When the novel begins, Sir Thomas Bertram is called away because of “some difficulty” in Antigua, the place from where his income flows; reading the history of Antigua from the time the novel is placed tells us that the island was one of those seething with unrest: plantations burned, crops destroyed, fortunes lost. When Sir Thomas returns to Mansfield Park, after an absence of two years, Fanny Price very briefly opens the subject of his island holdings; just as briefly, it is closed and the subject of slavery (for we know that it how his plantation must have been run, with slaves) has been introduced and dropped.

This program explores the subject of the slave trade and slave holdings in the Indies at the time of Jane Austen and what might be termed “moral neutrality.” Jane Austen was a well-read young woman and would have known that the fortunes that provided the lifestyle for the great houses that she would have visited, as a clergyman’s daughter, could very well have come on the backs of slaves. She knows enough to introduce the subject, and yet, she drops it and it does not return to the novel. Why does she remain “morally neutral”? 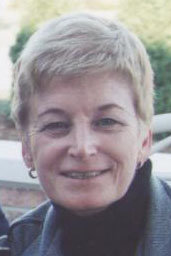 Diane Capitani, PhD , holds four master’s degrees from Northwestern University, the University of Chicago, and the Garrett Theological Seminary at Northwestern University in French, English literature, comparative literature, and theology and history and a PhD in theological and historical studies from the Garrett Theological Seminary at Northwestern University where she is the Director of the Writing Center and Affiliate Faculty in writing and theology. She is also a lecturer in English, comparative literature and religion at Northwestern University where she has twice been a nominee for the Distinguished Teaching Award. She has published one book, Truthful Pictures: Slavery Ordained by God in the Domestic Sentimental Novel of the 19th Century South and is currently finishing her book Jane Austen: Augustinian, as well as a Jane Austen novel. She has published articles in feminist theology, Christianity and literature, and Iris Murdoch, here and in the United Kingdom. She has spoken before the Jane Austen Society of North America at several Annual General Meetings, as well as the Greater Chicago Region, the North Texas Region, and the Louisville, Kentucky Region.

Jane Austen in the 'hood

Location, location, location. . . . How those words becomes our mantra when purchasing or selling real estate, but where you lived in Regency London not only established an address but also spoke of your class in society. This lecture explores the social geography in Jane Austen’s novels by using colorful prints from the era and the amazingly detailed Horwood’s Map of London dating from 1813. When you place the characters on a period map, clues are uncovered that would have been obvious to readers of Austen’s time but are less apparent to today’s readers of the novels.

Who's the Real Villain in Mansfield Park?

Most readers of Mansfield Park would point to Henry and Mary Crawford, Mrs. Norris or Sir Thomas Bertram as the villains but are these characters the catalysts that move the plot forward or real villains? Jane Austen has a much bigger target in mind and using map panels from the 1813 Horwood Map of London, contemporaneous prints and real life events of the times, we'll see how Austen skewers London society as a representation of the larger society in a time of war, industrialization and rapid social change.

For 200 years, Mr. Darcy has sought out Wickham and Lydia in London.  His one clue is to find his sister’s former governess Mrs. Younge, but who is Mrs. Younge and where is her new location on Edward Street?  Using a combination of contemporaneous prints and panels from the 1813 Horwood’s Map of London, we’ll become Bow Street Runners and try to locate both Mrs. Younge and the elopers. 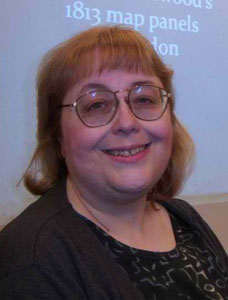 Sue Forgue is an armchair academic and history buff. She received a degree in Classical Voice with a concentration in Business from Northeastern Illinois University and is now an accountant in private practice. She is the creator and webmistress of the research website, The Regency Encyclopedia, www.reg-ency.com. In addition to lecturing on the Regency Era and Jane Austen, she has also written articles for both the Jane Austen Society of North America National and Greater Chicago Region newsletters and Jane Austen Knits.

Note: All of these talks are in PowerPoint format, and require a data (LCD) projector. Speaker can bring a Mac laptop if the venue cannot supply a laptop.

Estimating Lace and Muslin: Dress and Fashion in Jane Austen and her World

Jane Austen’s lifetime saw some of the most radical changes in fashions and styles in history. Although Austen is always an astute observer of human foibles and contemporary customs, she seems to make only rare references in her novels to current fashions. But fashion (as a symbolic idea, as it were, as well as in reality) plays an important role in her work, and her letters reveal her to be as style-conscious as any "fashion groupie" today. This slide-illustrated talk will look at the development of both British and French fashions and the complex relationship between them in Austen's era, with references to her witty and perceptive comments on fashion, for a better understanding of this complex and fascinating period.

The Gothic novels lampooned by Jane Austen in Northanger Abbey were part of a much larger cultural context inspired by the Middle Ages and Renaissance that flourished during the late 18th and early 19th centuries. This lavishly illustrated lecture will examine the ways in which Medieval and Renaissance influence extended to the area of dress, from elements of fashionable clothing inspired by the work of Old Master to the variety of period styles employed on the stage. Just as in the Gothic novels, diverse historical influences are mixed and matched in fashion and stage costume, and anachronisms abounded. The talk concludes with a discussion of the ways in which artists and designers even employed deliberately ghoulish elements in dress, the earliest stirrings of the “Goth” dress of today.

Jane Austen and the Beauty of Place

Although Jane Austen is not always the most visually descriptive of writers, there is a lot of evidence in her novels to indicate that she and her characters admire the beauty of their surroundings. This admiration embraces, but also goes beyond, the grand country houses so beloved of the makers of period films and the Picturesque scenery admired by Austen’s contemporaries. Austen herself particularly admired the beauties of English country villages, the sorts of places in which she mostly lived, and in which her novels are mostly set. What makes a place beautiful–nature, human endeavor, the web of emotional associations human beings give to the places we love? This slide-illustrated lecture addresses these questions and explores the reasons for the importance of beauty in Austen’s work. 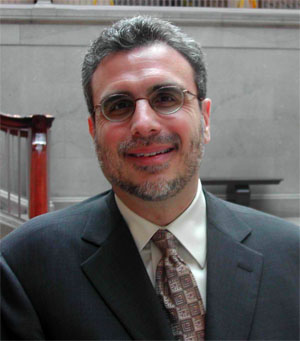 Jeff Nigro is an art historian, lecturer and educator. He received his B.A. degree at Oberlin College, and his M.A. degree in art history at the University of Virginia. Jeff has been associated with the Department of Museum Education Department at the Art Institute of Chicago for over 20 years. He began lecturing on the Art Institute's collections in 1988, became a full-time staff lecturer in 1993, Senior Lecturer in 2000, and Director of Adult Programs in 2004. Jeff received the Art Institute Chairman's Award for outstanding service in 2003. He has also given pre-concert lectures for the Chicago Symphony Orchestra, both at Symphony Center and at the Ravinia Festival, and he has spoken to the Hyde Park and Winnetka Chapters of Lyric Opera of Chicago. He was The Jane Austen Society Traveling Lecturer for the Midwest for 2001, and currently serves as Regional Coordinator of the Greater Chicago Region of The Jane Austen Society of North America.