The History of the Greater Chicago Region

The Greater Chicago Region of the Jane Austen Society of North America (JASNA) dates back all the way to the founding of the North American organization. At the very first Annual General Meeting (AGM) in October 1979, two Austen enthusiasts from Chicago, Cappie McQuarrie and Harriet Rylaarsdam, were inspired to form a region with Harriet becoming our first Regional Coordinator.

The JASNA Chicago Area Chapter, as we were first named, had a small membership of twenty and meetings were mostly held in people’s homes, discussing books and the theme of the Annual General Meeting. But soon Maggie Hunt Cohen became our second Regional Coordinator and seeing great potential for the Chicago region, proposed a Jane Austen Gala Day, a December birthday tea and a regional newsletter.

Banner at the 1988 AGMJust five short years after our founding, the regional membership stood at around one hundred and we needed to move out of people’s homes and to find full-service facilities, such as hotels, to accommodate the number of people wishing to attend our events. Because of these added expenses, annual dues were then instituted. This attention to organization was the foundation for our region to consider hosting an Annual General Meeting, and in 1985, our formal offer to be the host city in 1988 was enthusiastically accepted.

Preparations for this Annual General Meeting were intense but in the intervening years we continued to grow and add events – the February winter meeting and summer event both first appeared at this time, along with the Emporium at the Spring Gala. And in light of our rapid growth, we also changed our name to be the JASNA Illinois Region. 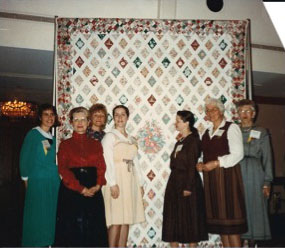 Members of the Quilt Committee: Hilary Bagnato, Marilyn Packer, Sherry Leonchik, Tammy Bretscher, Karen Fredrickson, Carol Sheldon, and Maggie CantrallWe welcomed a record 325 members from all over North America and England to Chicago’s Palmer House Hotel on October 14-16, 1988 for our first hosted Annual General Meeting, “Jane Austen’s England.” Attendees had fifteen breakout sessions available to select from, which you can read more about at 1988 Annusl General Meeting. The quilt, the pride and joy of our region was first unveiled at this AGM. Lovingly stitched by fifteen of our members, its design is based on the one displayed at the Jane Austen House Museum, Chawton.  (Click here to read "Quilting with Jane Austen" by Luanne Bethke Redmond)

After the AGM, we continued to grow in membership, and not content to rest on past successes, we continued to seek innovation in both programming and administration. In 1993, now known as the Illinois-Indiana Region, we hosted 300 attendees for a mini-AGM at a multi-regional meeting at the Drake Hotel.

Administratively, the region went online in 2004 with the first version of the website, which was totally revamped in 2008. To serve our growing membership, in 2006 we contracted with 123signup for our online event-registration and credit card processing needs. All of this was quite helpful as we contemplated hosting our second Annual General Meeting. 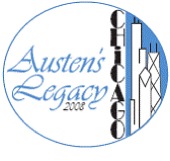 Almost twenty years to the day after our first AGM, on October 2-5, 2008, the renamed Greater Chicago Region hosted Chicago’s second Annual General Meeting, “Jane Austen’s Legacy: Life, Love, & Laughter,” at the Westin Michigan Avenue Hotel. This time the record-breaking attendance was 670 attendees, including guests traveling from all over North America, plus friends from the United Kingdom, Switzerland, and New Zealand. Members had a choice of 35 breakout sessions and something totally new for AGMs, 20 poster sessions. Read more about the 2008 AGM here.

Now, as of 2012, the Greater Chicago Region numbers over 200 active members, and we continue to grow and present imaginative programming. In redesigning this website for the third time, our goal was not only to appeal to Austen enthusiasts but to expand our scope by providing learning resources and programming for those unable to come to our events.