The Clergy in Jane Austen's Time 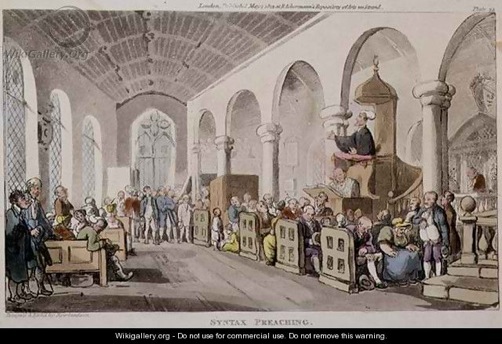 Only a small amount of historical research has been done on the Anglican clergy of Jane Austen’s time, the clergy that Jane would have been familiar with in her own family and their circle of friends. In the main, this is because the “church” world in Austen’s day was occupied with the advent of the Evangelical movement that Jane so deplored (after all, she did say “I do not like the Evangelicals”), in part, one can suppose, because early on it seemed that they were opposed to scholarship for the clergy, an idea later proved false. The Evangelicals did, however, practice a different kind of Christian service than the staid and formal Anglican service of Georgian England; consequently, religious historians have concentrated on writing their history and paying little attention to what was going on in the Anglican churches frequented by Jane Austen and the residents of the small, country villages and larger towns like Bath and Lyme Regis. This requires us to do a little digging.

The clergymen the Austen reader is acquainted with, unfortunately, with the exception of Edward Ferrars of Sense and Sensibility, who comments that he has “always preferred the Church” and Edmund Bertram of Mansfield Park, who seems to be strong in his vocation, are the too-foolish Mr. Collins of Pride and Prejudice and the too-socially ambitious Mr. Elton of Emma. This has led some critics, knowing that clergymen were an important part of Jane Austen’s personal life and family, to assume that she is mocking members of her own family, even her father! Not true! The clergy play a very important part in her work, because they played an important part in her life, arguably even more than the Navy, and she loved the Royal Navy and her brothers’ connection to it. What Jane takes exception to are those clergymen who are not all they should and could be, those given preferment that they do not deserve because they know how, in today’s parlance, “to kiss up.” How did a clergyman get to be a clergyman, one might ask? 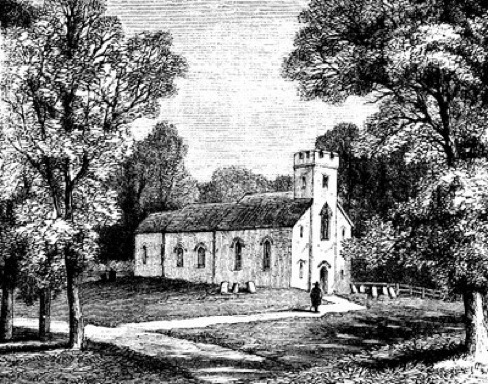 The Church was definitely a career in Austen’s time. It was virtually impossible to be ordained in the Anglican Church without a university degree from Oxford or Cambridge. This, of course, meant that a poor boy had no chance of ever reaching this goal, no matter how great a call from God he might have. Of course, a wealthy patron could provide the funds for one to “go up” to university, but it was more likely for someone like a James Austen to receive patronage of this sort than a stable boy. Once at university, a young man would receive the same education as everyone else: this was not specific theological training going on here, even though there were some divinity lectures one could attend. He was training for a profession, not entering a divinity school of the kind one enters today, which requires rigorous training over a period of several years. Since the Church was one of the few professions considered acceptable for a young man of good position, no one thought to ask him if he had “a call” or “a vocation,” as one would expect today. It was, of course, assumed that he would possess good, sound morals (which is why Henry Crawford, considering a life in the Church when he thinks he loves Fanny Price, is rather a joke), but beyond that, he would need a patron to provide him a living, a church, upon his leaving university. There was no regular system of being appointed by a bishop or being called by a church council as there would be today in the United States, when a student graduates from seminary. In the Britain of Austen’s time, the Anglican Church did hold a significant number of livings, so that a bishop could bestow them if he chose, but that did not happen with great frequency. However, some young men, like Edmund Bertram, were fortunate enough to have a father who could provide a church and a living for them upon their leaving school, so they could afford the time to do something else for a few years; others often looked for a fellowship to continue studies, as John Wesley, the founder of Methodism, did in his youth, having no patron. A living could be provided by another relative besides one’s father, of course. Even the Crown had livings available to bestow. It was necessary for the clergyman to be ordained, but that was a much easier process then than now and usually went through without a problem, depending, of course, on the bishop doing the questioning (makes one wonder who was questioning Mr. Collins!). During ordination, some religious questions would be asked, so one assumed that the ordinand should have had at least a little familiarity with the Bible and the Book of Common Prayer! 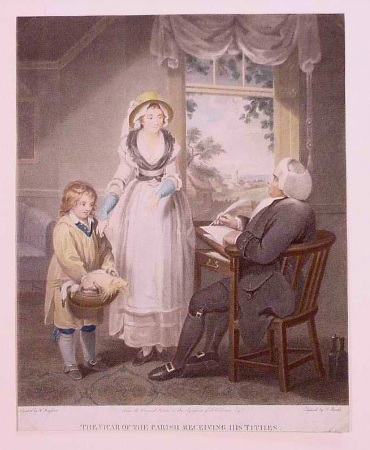 How did these clergymen get paid? And how much did they earn? Good questions. As in the churches today, the livings varied enormously, depending upon where one was given a church AND if one was the Vicar, Rector or a curate. A word of explanation here about these titles might be in order first: a Rector was, and is, the priest of a church in a parish that was self-supporting, while the Vicar would be in a church in a parish that was not. The poor, little curate was the assistant (still is) to the person in charge of the parish, who pays him (or her, today). The priest (and I’m not using this word in the same way it is used in the Roman Catholic Church), would, of course, receive the tithes of the church. If it was a small one like Steventon, it might only be about 100 pounds a year. If it was a large church, in a larger city like Bath, the salary could go up to as much as 1000 pounds. In a large church, the vicar could also have a curate to assist him, sort of a clergy-in-training, who would receive a very small stipend and would scrape to get by, often taking extra duties at out-lying hamlets. The tithe has always been, and is still, 1/10 of the parishioner’s income given to the Church, or in this case, the income of the cultivated land in the parish. Of course, with the living came a house for the clergyman and his wife and family to live in, rent-free; if he was lucky and had received a comfortable living (one such as Colonel Brandon was going to provide for Elinor and Edward), this could be quite pleasant. This was not always the case, however. Unfortunately, the clergyman himself had to collect these tithes, which could be quite unpleasant at times if he wasn’t popular with his flock. If there happened to be a rector assigned over the clergyman, he would receive part of these tithes, as well. Of course, in addition, there was some money to be made from collecting fees from weddings, baptisms, and funerals, as well as tutoring boys in their home, as Jane Austen’s father did. A complicated situation. It made it almost impossible for the clergymen to have a secure old age; there was no home ownership and never enough money available to save for one. The Austen ladies’ insecure situation when Mr. Austen died points out to us how difficult it was for the parson’s family left with no home, and even before that, when Mr. Austen retired, how little there was to live on and how pitiful their circumstances. While entering the Church was seen as a respectable, well-regarded profession (except by Mary Crawford), it did not provide much promise for security in one’s old age.

It is interesting that Jane Austen never indicated that she would change anything about the patronage system; it was imbedded in the tradition, and church tradition was everything. Perhaps she is too harsh on Mr. Collins in making fun of him. He certainly knows on which side his bread is buttered when he fawns over Lady Catherine. As long as he stays on her good side, he has an extremely comfortable home and living, better than most, and will not have to collect any other rents (monies collected from church-owned properties) because Lady Catherine more than makes up for any shortcomings. The Collinses live comfortably by most clergy standards of the time; if Charlotte can stand living with him, the rest of her life could be quite pleasant 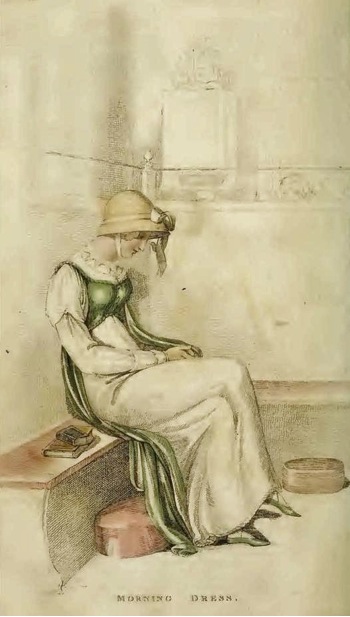 A brief word about marrying a clergyman: When women like Elinor in Sense and Sensibility or Fanny Price in Mansfield Park seem eager and well-suited to marry men bound for the Church, do we wonder, at times, why is this so? Unless there is some family money behind them, we now know that they might not always live comfortably or in pleasant circumstances. Certainly, Edmund Bertram will have Sir Thomas’s money behind him (we hope, but then that depends upon how he makes his money when the slave trade dries up), which might make their situation easier, and Elinor and Edward will have Colonel Brandon always there with a helping hand, but not every clergy couple had it so good. The parson’s family, or his wife, if they had not yet been blessed with children, were accepted immediately into the neighborhood by the gentry because they represented the Church. Their financial state did not matter, so they were always included in the parties at the “big house” and were not expected to entertain in kind. “Mrs. Parson” would be expected to make the rounds of the parish, visiting the sick and the elderly, dispensing jellies and herbal remedies, if possible, and helping out wherever needed, sitting at sick beds, helping new mothers. A young woman, hoping to marry the new, unwed clergyman in town, had surely better know what she was letting herself in for! It goes without saying that when her own children came along, they had best be paragons of virtue, because it would be their mother who would be criticized if they were not, rather than their father. One can see why this life would not have appealed to Mary Crawford.