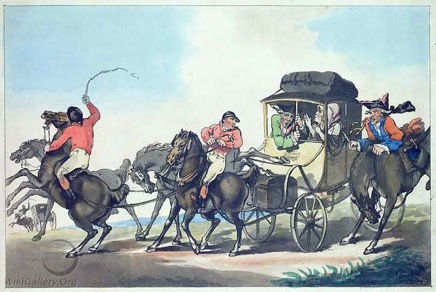 One of the things a reader of Jane Austen notices after a number of readings is the amount of movement in the novels - the constant comings and goings of the characters with their visiting to each other, their travels to London, with seemingly hardly a thought about journeying from one end of England to the other.

Austen knew first-hand the travel issues of her day and she was very knowledgeable and consistent in writing about it in her novels – often not spelling out the specific details but the clues are all around to be found. But most readers don’t realize how arduous travel was in Austen’s day. As Mrs. Jennings in Sense and Sensibility so aptly asks of the Misses Steele, “How did you travel?” 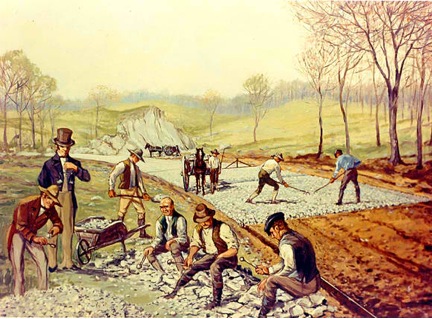 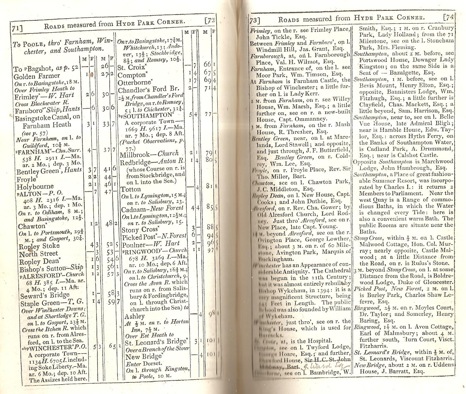 The first difficulty encountered in traveling was the roads themselves. The condition of the roads varied widely from good to deplorable, as each parish was responsible for the maintenance of its own thoroughfares. Good roads, some dating from Roman times, were paved with large stones but most country roads were dirty, muddy and in foul weather, dangerous.

There were many measures taken to improve the roads and establish a toll pike system between major communities that began in Austen’s lifetime and greatly expanded just after it. The chief improvement to the roads came via a Scot, John MacAdam, who used layers of compacted small stones and gravel over a base of large stones. This gave the road a consistently even surface which made driving upon them both easier and quicker. It was so effective and popular a solution that these roads and the process to create them were referred to as “Macadamized”.

When Darcy and Elizabeth, in Pride and Prejudice, discuss the distance between Hunsford and Meryton, could the “fifty miles of good road” being “a very easy distance” refer to a recently Macadamized road?

Despite the hazards of the roads, one could travel great distances more quickly than ever before and there were many travel guides such as Paterson’sBritish Itinerary and John Cary’s New Itinerary that published routings, mileages, stage and mail coach departures and arrival times, principal sights and inns in each town and much more valuable information.

Map of Real and Fictional Places in Jane Austen’s Novels - click on the map to expand,  Courtesy of The Regency Encyclopedia (www.reg-ency.com) 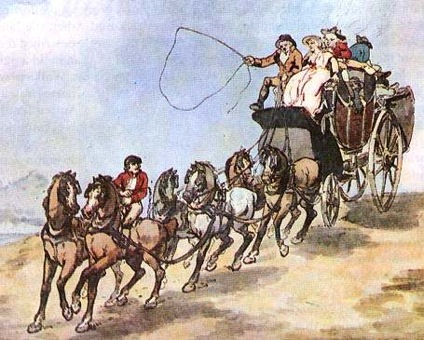 Once a destination was chosen, like today, there were many other factors to be considered when planning a travel itinerary. Primary among them would be whether to travel by private coach or by the mail or stagecoach.

The next illustration is a map of England with both the fictional estates found in Austen’s novels and real places displayed.

While the distances are not great, especially compared to the great expanses traveled in the United States, it took considerable time to journey from one place to another. Yet these travel times were a vast improvement from what journeying would take in Austen’s grandparents’ lifetime.

These are average travel times based on the routes and timings listed in John Cary’s New Itinerary of 1819. Usually fifty to sixty miles per day was the maximum daily travel in a private coach, with the horses being changed every ten miles or so.

The Stage or Mail Coach was definitely quicker but also much less comfortable than using your own vehicle or a hired private carriage, as these coaches traveled all day and all night until it reached your destination. Stagecoach routes had an added disadvantage, as the interior would be crowded with as many as six passengers inside and an unlimited amount of travelers riding on top. This made the carriage top-heavy and subject to tipping on tight curves or slick surfaces.

All these “wheeled” modes of travel were expensive and many people were forced by economics to travel by foot, therefore their range of visiting was limited to how far their feet could carry them. Indeed, some historians claim Jane Austen walked a couple of miles every day as she did not have a ready means of transportation available for much of her life.

In fact, Austen was highly dependent on her brothers to escort her, her sister or their mother to any place of more than a few miles distance from their home, as no respectable lady would ever travel by herself. While that prohibition seems extremely restrictive not only for us today but even for the resourceful heroines portrayed in the novels, there were good reasons for it to be so. Chief among them were that highwaymen roamed the countryside in search of easy carriages to rob. So prevalent were they on the roads that the Mail Coaches had armed guards sitting next to the driver on all their routes.

Elizabeth Bennet in Pride and Prejudice can continue to insist on leaving Rosings as originally planned, as her uncle’s manservant will be there to escort her and Maria Lucas back to London once they change carriages from a de Bourgh carriage to a hired private coach once they arrive at the more public roads. Edmund Bertram escorting his cousin, Fanny Price from Portsmouth in Mansfield Park is another example of this social standard in the novels. The most shocking example where this social dictum is breached is when General Tilney in Northanger Abbey sends Catherine Morland back to her home unescorted on public stagecoaches. A reader of Austen’s day would have known from this action that General Tilney is not only an ornery man but a deeply irresponsible one as well.

No matter how our favorite heroines travel, there is one thing they or anyone else will never do – travel on a Sunday. While there were hundreds of routes and stagecoaches traversing through Regency England, none of them ever operated on a Sunday, as most commercial traffic was prohibited by law until the 1930s. Wealthy people who owned their own carriage, were supposed to honor the Sabbath and only use their vehicle for going to and from church, but many did commence social travel without any condemnation befalling them. 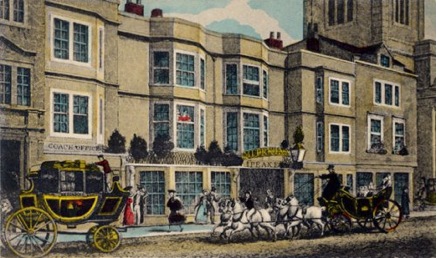 The combined weight of carriages, passengers and their luggage would be quite heavy and the horses pulling these carriages would soon become tired after about ten to twelve miles. That is why a network of coaching inns developed all over England. Every town, small or large, would have at least one and there were several famous inns in London as well. Here a traveler would hire out horses to take the carriage to the next stop along the coach route or grab a quick bite to eat while the horses were being changed. If the traveler was using their own private carriage, rooms would be available for an overnight stay. Again, the comfortableness of these inns varied greatly, but many travelers would not venture from their homes without bringing their own linen and silverware.

Austen would have also known the coaching inns of her day – she would have stayed in them during her own numerous travels and she included several mentions of them in the novels. In Sense and Sensibility, Edward Ferrars stays at an Inn when he leaves London after he is disinherited, and Robert and Lucy Ferrars visit the New London Inn in Exeter following their marriage. In Pride and Prejudice, Lydia and Kitty orders a luncheon of cold meat and salad while waiting for the carriage bringing Jane, Elizabeth and Maria Lucas from London and of course, Elizabeth and the Gardiners, would have stayed at inns on their summer pleasure trip, including Lambton, where Darcy brings his sister and Bingley to call on them. Another pleasure trip, the visit to Lyme Regis in Persuasion, had the whole party staying overnight at an inn. These are just a few references to inns but every novel has a mention of someone staying at or visiting an inn, that’s how vital it was to Regency Era travel.

In Part 2, we’ll talk about the many various carriages that are mentioned in the novels.

To read the original blog posts, which focus on travel in Sense and Sensibility, please visit: